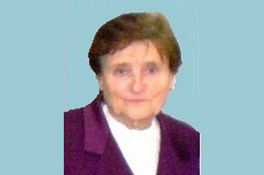 POPENKO GALINA SERGEEVNA
(on the occasion of the 80th birthday)

February 6 marks 80 years of Popenko G.S.
Popenko G.S. started in 1960 in Almalyk GRE, a collector, being a student of the Tashkent Polytechnic Institute. At the end of TashPI in 1961 received the specialty of mining engineer geologist. Since 1961, G.S.Popenko has been working in the system of the Ministry of Geology and then the State Committee for Geology of Uzbekistan since 1961 as a geologist, senior geologist, senior mineralogist, team leader, and leading geologist.
G.S. Popenko is a hereditary geologist. Her father, S.N. Popenko, in 1946 conducted the first areal prospecting in the Chakylkalyan mountains, as a result of which the Akkurgan, Kamangaran, Chashtepa and Yakhton tungsten ore occurrences and deposits were identified. From these discoveries, the mountains of Chakylkalyan began to be considered a tungsten-bearing province.
Mom, Lutsenko A.K., a well-known sulfur specialist, was developing the prospects for sulfur content in all of Uzbekistan. She is also known as a herbal healer. For many years in the club of veteran geologists she lectured on the healing properties of herbs and their use in practice. Thanks to herbal treatment, she extended her life (died at 102 years of age), and helped her sick colleagues.
Popenko G.S. participated in the mapping of minerals in the Andijan and Ferghana regions (1962). From 1963 to 2010 worked in prospecting and exploration parties on the problem of placers in the Republic, mineralogy of placer minerals and their relationship with indigenous sources. Carried out prospecting for placers of gold in the Chirchik-Pskem and Angren basins. She participated in the compilation of a forecast map for gold placers of Chatkalo-Kuraminsky region (2002).
G.S. Popenko is a unique specialist in the sense that while working in production and being a field geologist, she was constantly engaged in science. The main direction of her work: the study of the mineralogical and geochemical features of gold from placers and primary deposits; development of criteria for the allocation of morphogenetic types of gold, search features, factors of localization of ore mineralization, issues of genesis and forecasting.
Studies on the mineralogy of alluvial gold are reflected in the dissertation (1977), the monograph Mineralogy of Gold of Quaternary placers of Uzbekistan (1982), in the Atlas of Native
gold from placers of Uzbekistan ”(2003, 2007). The compilation and publication of the Atlas was carried out during the years of Independence and is dedicated to the 80th anniversary of the geological service of the Republic. The atlas summarizes long-term studies of native gold from placers of Uzbekistan. The conditions of formation and patterns of the distribution of Quaternary gold placers are shown, a classification scheme for placers is given. The morphogenetic types of alluvial gold and different-aged types of corroded gold were identified and mapped, their significance for placers, forecasting and searches for native gold mineralization was shown. The atlas perfectly reflects unique examples of transformations of gold in placers. The narrative is illustrated with beautiful photographs. Such a complete and at the same time compactly compiled actual material on gold is presented for the first time. And now, along with the book of Petrovskaya N.V. “Native gold”, “Atlas” remains a handbook of mineralogists and geologists-placers both in Uzbekistan and far beyond its borders.
In 2011-2012. G. S. Popenko developed and approved the methodology for the study of native gold in the production of advanced specialized prospecting works at the State Center for Civil Protection and Genetics.
G.S.Popenko is the author and co-author of more than 45 geological reports (including 12 reports as part of the SE “TSGE”), more than 30 articles, monographs and Atlas.
In 2018, according to the Gissar-Fergana (Babatag) project, G.S.Popenko proposed a method for extracting visible gold from concentrates of technological nodule samples by the method of preliminary water dissolution and screening (-4 + 2; -2 + 1; -1 + 0.01 mm). Developed recommendations for improving this technique.
In 2019, G.S.Popenko went on a well-deserved rest, but continues to study the morphogenetic features of gold according to the projects of the SE “TSGE”.
The highest class specialist. Despite his venerable age, G.S.Popenko has the energy and enthusiasm of a search engine researcher that young people will envy. She gladly shares her knowledge and experience with young specialists.
Inexhaustible diligence, a friendly attitude towards people, decency, exceptional honesty and modesty, as well as personal charm are virtues that allowed her to earn deep respect among her colleagues.
Congratulations dear hero of the anniversary, we wish you good health, long life, energy and vigor, active work, family happiness and prosperity.

The staff of SE “Central HGE”