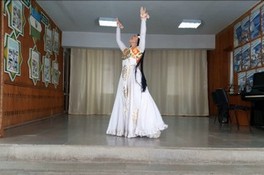 On March 29, 2019, a vocal and instrumental concert entitled “Melodies of Navruz” was held with the participation of teachers and students of the Samarkand College of Arts named after HA. Abdurasulova. Such concerts as Ashkenazi “In the Park of Chair”, Bulakhov “Bells” performed by a 2nd year student Turopova Turobali, “Buy violets”, “You swim a flower” performed by Aliyeva Sanovar, “Dzin, Dzin, Dzin” performed by 3-year student Kristina Tolibova and other students – musicians and vocalists, where Galkin F.N., Bazarova V.U. acted as accompanists trolled product and led thematic links to the holiday of spring and renewal, “Navruz”. The presented program sounded unusually fascinating, dynamic, bright.

On May 3, 2019, a festive concert dedicated to the Day of Remembrance and Honors was held under the name “Let us bow to those great years!” 1941-1945. with the performance of songs and music of the war years.

On May 24, 2019, a performance was held on the theme “Dances of the peoples of the world” with the participation of the popular dance ensemble Afrosiyob under the direction of artistic director Ibragimova Charos Shodmonovna. Incendiary and fascinating performance of dance, music and vocal numbers created the atmosphere of the region of dance origin. The alternation of dance and music numbers revealed the breadth of national dance art, and the students’ performances themselves delighted the audience-employees of the Enterprise.

Such concerts instill a true love of classical music, vocals and dance, leaving vivid emotional impressions and a desire to hear and see talented youth.